It’s a crisis point in history for Native American languages. Without a concerted effort to revitalize them, many will soon go extinct, succumbing to the generations-long effort to destroy them.

“You could reasonably say every single Native American language, including the large ones, are endangered,” said linguist K. David Harrison, a National Geographic fellow teaching at Swarthmore College. “There’s no room for complacency whatsoever.” 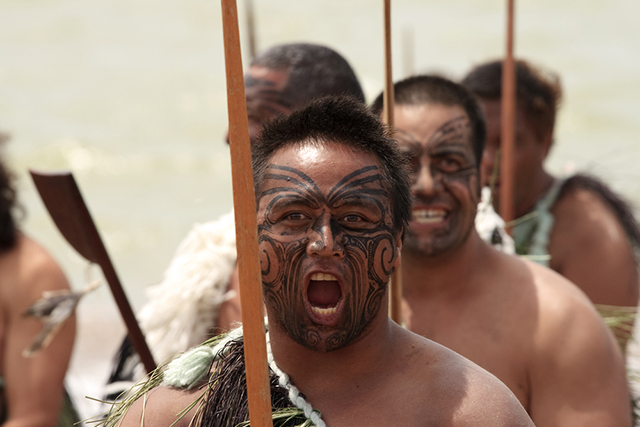 A Maori warrior chants at a Haka during a Waitangi Day celebration, February 6, 2009, in Waitangi, New Zealand. The Maori are one of many groups that have struggled against the violent effects of colonization on their languages. (Photo: Patricia Hofmeester / Shutterstock.com)

The Maori people of New Zealand are one of many groups that have struggled against the violent effects of colonization on their languages. In 1840, the Maori came under the rule of the British Crown as more and more European settlers arrived and more land was needed to accommodate them. Land conflicts eventually broke out into all-out war, ending with huge tracts of Maori land being confiscated by the government. Displacement, poverty and racism became commonplace. Their struggle now reflects that of other Indigenous peoples and nations across the globe fighting to preserve their knowledge, culture and traditional way of life.

Hana O’Regan is Ngāi Tahu, Maori. She is the director of Maori and Pasifika and director of student services at the Christchurch Polytechnic Institute of Technology in New Zealand. Her great grandparents were fluent Maori speakers. They never passed it down to her grandmother.

Determined to reverse that trend, O’Regan began learning Maori at the age of 13 as a second language. She then taught her children Maori as a first language.

“Language is a fundamental element in terms of having a positive cultural identity,” O’Regan told Truthout. “The first tool to demoralize a people was the destruction of their language. They knew that it had a direct relationship with the way those people then felt about themselves. It’s a tool that was used throughout Africa, America, Canada, Europe, and was even used with the Welsh and the Irish.”

The Maori language gives O’Regan’s children a profound sense of belonging, she said. “They’ve had to go through a lot of hard times,” she said. “Even when things are really bad, they’ve always gone back to that sense of identity. That’s the thing that can always locate them and make them feel like they have a place and make sense of everything. That’s the gift of your heritage language.”

Nothing illustrates the difference between learning Maori as a first or second language more than a story that O’Regan told Truthout about a powerful earthquake striking her hometown of Christchurch in late 2010.

“I learned about the traditions and the way we connect to the natural world but it was almost academic. It wasn’t in me. The way the Maori see the world is through our Gods,” she said. “I learned about them, but I still thought that when there’s a tsunami, or an earthquake for instance, there were reasons for it like shifting tectonic plates. That’s how I’m seeing the world. My children saw those earthquakes as being something completely different. It really hit me probably for the first time that the way they saw the world was different because Maori was their first language. There was no questioning it.”

As the powerful earthquake struck the beach where O’Regan and her family live, her son surprised her by grabbing onto her shirt as the ground shook under their feet. He shouted, “Mom, please pray to Ruaumoko!” In Maori mythology, Ruaumoko is the god of earthquakes and volcanoes.

Concerned only for her family’s safety, O’Regan confessed, “The last thing on my mind was a prayer to the god of the earthquakes. I’m thinking there may be a tsunami, we have to get to higher ground. But in his world that was absolutely what we needed to do. And I thought well if there is a tsunami I have to do something to settle my son down so we prayed to Ruaumoko, and he settled down.”

“It was just incredible,” said O’Regan. “My children, who were like 6 and 7 years old at the time, weren’t just theorizing it. They were connected. They understood their place in this world and their relationship to it. And that was mind blowing to me as a second language learner. It was their cultural self really taking over.”

“What’s at stake is not just the preservation of a language but a way of thinking and seeing the world around us,” O’Regan said.

Efforts to Preserve the Lakota Language

The Lakota Language Nest Immersion School (Lakȟól’iyapi Wahóȟpi) represents another instance of resistance to the colonial legacy that threatens many Indigenous languages. The school is a growing Lakota language program for children beginning at age 3. The school, located on the Standing Rock Sioux Tribe Reservation in North Dakota, is struggling to find ways of staying open as initial grants are set to run out.

As Truthout has reported, Tipiziwin Tolman is a Lakota language activities instructor at the school. Tolman’s family has a long history with the Lakota language. She recently learned that her great grandfather, Joseph Pretends Eagle Sr., was a Lakota code talker and Silver Medal recipient during World War I, transmitting coded messages in his native tongue about troop movements or positions that were virtually impossible to break. While they had always known that Pretends Eagle Sr. was a veteran of the war, his role in using his traditional Lakota language to fool enemy troops was a secret he kept only to himself until his death. Recently released government documents revealed that Pretends Eagle Sr., along with many other Lakota warriors, played that role during the war.

Despite the contributions to the United States from many native families such as Tolman’s, keeping traditional Lakota knowledge and identity alive is a constant battle against US government policies created to oppose it.

“Our people’s struggles and our people’s social ills are really tied to this lack of identity which comes from all of those past wrongs,” Tolman told Truthout. “All of those federal mandates and policies that strictly forbid us from speaking our language and practicing our spirituality and our traditions did something to our peoples’ spirits.”

For example, Christian boarding schools received mandates to take thousands of Native children as young as 5 years old from their homes and families, tortured and abused them, and forced them to worship as Christians, all in the name of “saving” them. Other policies that Tolman mentioned included the banning of spiritual ceremonies in the past and the blood quantum law, which was designed by European colonists to determine who was to be considered Native American and who was not. If your blood did not measure sufficient generations of native bloodline, a certificate would not be granted. Today, the amount of blood quantum needed to be enrolled in a tribe varies from nation to nation.

“We didn’t impose any of the rules on ourselves as to who is and who isn’t Lakota. Our people didn’t think like that,” said Tolman, suggesting the policy was at odds with a more traditional, uncolonized way of Lakota thought. “That was a government policy, and our people have bought into it. We fight all the time over who is full blood and who is not, who does or doesn’t look like an Indian. We have such huge identity issues. It comes from language loss but it also comes from embracing policies like that. We didn’t do that to ourselves. We are holding onto that idea of who is more Indian because it says it on my certification of Indian blood.”

Tolman said that more important than blood certification are answers to questions like these: “Do you conduct yourself as a citizen of our nation? Do you adhere to our traditional values of generosity and hospitality and speak our language? Do you help others in need? Do you put yourself last?”

“All of these Lakota social protocols can’t be measured in blood percentage,” she added. “That doesn’t speak to how I conduct myself as a Lakota woman or a Lakota mother.”

“Having access to the language strengthens our identity and is a healing process for our people”, Tolman tells Truthout. “It’s not the cure all, it’s a proven path. We can heal ourselves. We don’t need outsiders to do that for us. We have what it takes. Our language has been through so much. It’s like our elder. And this elder is very sick, very close to dying. It hadn’t been nourished. It had been silent. These children now are able to visit that elder. They are able to feed that elder’s spirit, to offer nourishment. That elder survived many atrocities and survived for a reason, so that this healing process could be provided to the children and people who need it the most. Learning the language is a healing process for yourself personally, for your family and for the people as a whole.”

The Language Nest has turned for now to online fundraising to survive. Despite the economic challenges, Tolman remains clear. “We are doing creators work. We believe in the vision and the future for the children. They already are in a sense our future leaders.”

Tolman can be seen in the upcoming documentary, Rising Voices/Hótȟaŋiŋpi, due out in November. The film addresses the worldwide assault on Indigenous languages while telling “the story of a passionate, dedicated and diverse group of people, including members of the Lakota community and linguists from outside of the community who are working together to save the language and restore it to its rightful place in Lakota – and American – culture.”

The purpose of the film, according to Meya, is “to inspire current Lakota nonspeakers and tribal members to learn the language, We need people to become shepherds and stewards of the language.”

Rising Voices also intends to reach out to non-Indian audiences to explain how, “out of the 5 or 6 hundred Indigenous languages that once existed here, only about a dozen left have a strong chance of making it, and Lakota is one of them,” according to Meya. “And by losing these languages, all of the culture and all of these traditions, and basically the social and community memory of these important Indigenous cultures have gone. We wanted to let people know that there is this important movement happening by young Lakota people who want to recapture their language.”

The film’s screenings have already served as an inspiration to many other Native nations and language learners throughout the country.

This article first appeared on truthout.org on August 21, 2015. © Truthout. Reprinted by permission.

Exclusive Truthout Interview: Sioux Spiritual Leader Speaks Out on Land Sale at Sacred Site
Lakota: The Revitalization of Language and the Persistence of Spirit