By Jason Coppola on September 12, 2016 in Articles

Amidst the cries of “protect our water, protect our land, protect our peoples,” Native Americans, ranchers and farmers are standing their ground along a highway in North Dakota. They are blocking the crews of Energy Transfer Partners — a Dallas-based company whose workers are protected by both police and armed, private security personnel — from accessing the site of the construction of the Dakota Access Pipeline.

The roughly 1,200-mile-long pipeline would transfer about a half million barrels of oil a day from North Dakota to Illinois. Opponents of its construction worry that a leak or rupture would spell disaster for not only the Standing Rock Indian Reservation, but for all communities along the Missouri River that depend on it for drinking and agriculture. 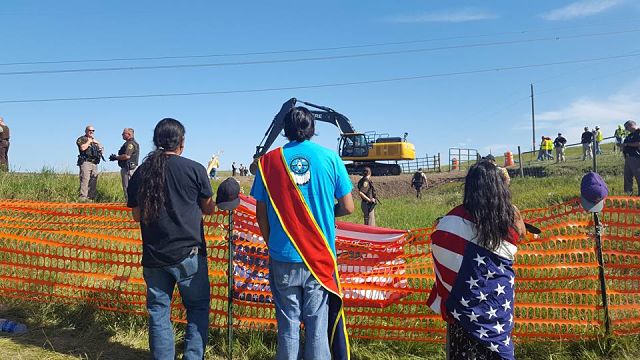 At least 10 arrests have been made. Morton County Sheriff Kyle Kirchmeier told the Bismarck Tribune that those arrested “were not staying within bounds set by law enforcement and getting in the way of surveyors working on the pipeline.” The arrests included a pediatrician and a grandmother who allegedly crossed the highway to check on a buffalo pasture.

As reported by Truthout in May of this year, Lakota youth, protesting the proposed construction of the pipeline, began a relay race from their Spirit Camp in Cannonball, North Dakota, to the office of the Army Corps of Engineers in Omaha, Nebraska, to deliver a petition against the pipeline. The Corps later decided to grant the necessary permits and green light the pipeline’s construction.

As the tribe prepared for the case, they were issued a 48-hour work notice that informed them construction was set to begin on the Dakota Access Pipeline on the morning of August 10.

That’s when the “Camp of Sacred Stones” was set up in Cannonball, North Dakota, along the Missouri River. LaDonna Brave Bull Allard, the historic preservation officer for the Standing Rock Sioux Tribe, put the call out to land defenders to come to the camp to peacefully resist through prayer and solidarity.

“When I first started this I thought, wow, I’m probably going to stand all by myself,” Brave Bull Allard told Truthout. “And now people are coming from everywhere. What [the company is] trying to do is get as much pipe in the ground before the government can issue a stop-work order. They are trying to start construction before they go to court.” 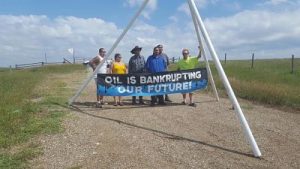 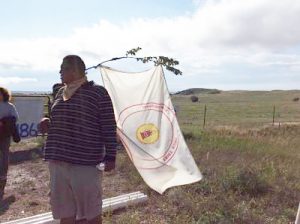 Standing Rock Sioux Tribe and their allies protest construction of the Dakota Access Pipeline. (Photo: LaDonna Brave Bull Allard) The call to stop the pipeline is being heard far and wide. During a stop in New York City’s Union Square, the “People Over Pipelines” runners held a rally to educate people about the pipeline’s consequences. Documentary filmmaker Josh Fox (Gasland) and actresses Shailene Woodley and Rosario Dawson lent their support. Dawson, through a

Brave Bull Allard explained to Truthout how the protesters turned the initial construction crews back. They returned soon after with more law enforcement personnel.

“They blocked the crew’s access to the site with teepees and prayer circles. When the crew tried to access it through a different route they were blocked there as well. Police, highway patrol and sheriffs were all there,” she explained. Brave Bull Allard noted that the object of their protest is not the individuals building the pipeline, but the project itself, and the violations it represents.

“Our goal is to not do any harm because the work crews are just people trying to make a living. Our job is to stand here in prayer,” she says.

Stressing their nonviolent intentions, Waniya Locke, also of the Standing Rock Sioux Tribe, told Truthout how organizers checked protesters for weapons when arriving. “We are asking everybody to come stand with us in prayer. We are asking that people don’t bring weapons. We want nothing but prayer. We have a lot of people from everywhere here and we still need more,” Locke said.

Moreover, she emphasized that the actions are meant to defend a broad range of people who have long depended on the river.

In particular, Locke noted, the Dakota Access Pipeline plan violates the treaty rights of the Great Sioux Nation, of which the Standing Rock Sioux Tribe is a part.

“All permits have been granted,” she said. “It really shows that the government can be bought out. They are not acknowledging that this is treaty land and it belongs to the Lakota/Dakota People according to the 1868 Fort Laramie Treaty.”

The Fort Laramie Treaty, signed on April 29, 1868, and bound by the US Constitution, guarantees the Great Sioux Nation absolute and undisturbed access of the Black Hills and lands spanning multiple US states, including the site of the pipeline construction on which they now make their stand.

The call to stop the pipeline is being heard far and wide. During a stop in New York City’s Union Square, the “People Over Pipelines” runners held a rally to educate people about the pipeline’s consequences. Documentary filmmaker Josh Fox (Gasland) and actresses Shailene Woodley and Rosario Dawson lent their support.

Dawson, through a megaphone, issued a clear message for those who gathered to listen to the group of Lakota runners, some wrapped in their tribal flags.

“When we look at what’s going on in Flint [Michigan], that’s not an anomaly. These are problems that are happening across our planet,” Dawson declared. “As long as we think it’s someone else’s problem, they’re going to continue proliferating…. This water is not just their water, it’s our water. We are going to recognize that water is more valuable than gold. This is a tipping point. We need to take advantage of it, and do something about it.”

Standing side by side with Lakota runner Bobbi Jean Three Legs and others, Dawson spoke to the urgency of the times. “At the moment they don’t have any choice. But sooner or later you’ll all realize that none of us actually have a choice in this. We have to stand up and fight together…. When we do that, we get the chance to say that we were the generation that said enough is enough. So please, keep spreading the message that water is life.”

Woodley arrived at the construction site in North Dakota in time to watch some her good friends being carried away in handcuffs. These events only seeming to solidify her resolve.

Locke, originally from Wakpala, South Dakota, grew up swimming and playing in the Missouri River and drinking its water. Her relationship to the river is as personal to her as it was for her ancestors who thrived along its banks.

It’s the same for Brave Bull Allard, whose land now houses the Sacred Stone Camp. When asked what might happen if the pipeline’s construction goes through, Brave Bull Allard held a long pause as if confused by the question. “I think maybe you’re talking to the wrong person,” she replied. “This is not about just a pipeline. It’s about saving the water. It’s about every community that lives along this river. We are going to win.”

This article first appeared on truthout.org on August 13, 2016. © Truthout. Reprinted by permission.

Lakota Lead the Fight Against the Dakota Access Pipeline