By Jason Coppola on September 3, 2016 in Articles

As the start of 2016 shatters last year’s record as the hottest year on record, the Oceti Sakowin (Seven Council Fires of the Great Sioux Nation) once again find themselves on the front lines of the battle against the fossil fuel industry.

Members of the Standing Rock Sioux Tribe have established a Spirit Camp at the mouth of the Cannonball River in North Dakota as a means of bringing attention and awareness to a proposed pipeline and act as an enduring symbol of resistance against its construction.

The Dakota Access Pipeline (DAPL) is set to cut through several US states, delivering hundreds of thousands of barrels of crude oil from the Bakken and Three Forks oil fields in North Dakota to Patoka, Illinois. 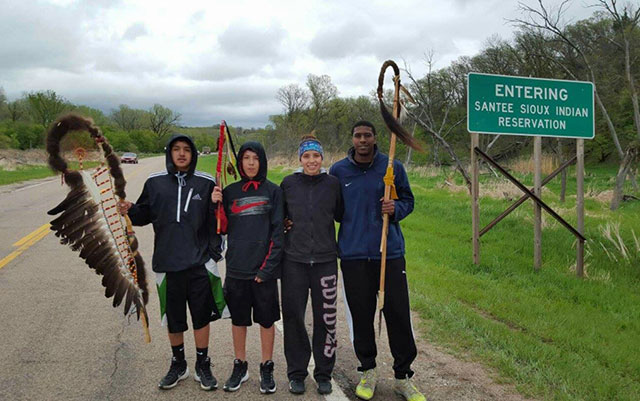 Natives and non-Natives have joined together for a 500-mile-long relay race to deliver a petition to the Army Corps of Engineers in Omaha, Nebraska, which is expected to soon decide on a permit for the pipeline’s construction. (Photo: Jason Coppola)

The Dallas-based Energy Transfer Partners pipeline will cross the Ogallala Aquifer — a million-year-old shallow water table spanning eight US states, which provides fresh water for drinking and agriculture — while twice crossing the Missouri River and running alongside the Standing Rock Indian Reservation.

A spill could contaminate the Ogallala Aquifer, one of the worlds largest, which is already in crisis and under threat of running dry in the coming decades.

The Mississippi River, of which the Missouri serves as its longest tributary, empties into the Gulf of Mexico, where, according to the National Oceanic and Atmospheric Administration (NOAA), “this year’s Gulf of Mexico dead zone — an area of low to no oxygen that can kill fish and marine life — is, at 6,474 square miles, above average in size and larger than forecast by NOAA in June.”

Further contamination from a leak along the Missouri River greatly increases this predicament and jeopardizes a fresh water source for millions of people.

Cedric Goodhouse, the Hunkpapa Lakota chairman of the Long Soldier District of Fort Yates on the Standing Rock Reservation, tells Truthout, “We are working on many fronts to coordinate opposition to the pipeline’s construction.” In addition to the camp, the tribe’s government “is working through federal agencies as well as reaching out to their own communities and schools in order to educate their people about the consequences of the pipeline,” he says.

Goodhouse’s community is no stranger to water crises. About seven years ago the Long Soldier District lost its water for over a week due to drought. Water had to be purchased by the Standing Rock Sioux Tribe and brought into the area. Goodhouse explained to Truthout how households were limited to about three or four gallons of clean water a day to wash, drink and cook with.

The Bakken Oil Field in North Dakota has symbolically acted as a forward operating base for the latest industrial invasion of Indian Treaty Lands, bringing with it corruption, pollution and violence, not unlike the time when gold was discovered in the Black Hills of South Dakota during the 1800s.

The sociocultural impacts for the “Great Sioux Nation” reach far beyond its environmental destruction.

Natives and non-natives have joined together for a 500-mile-long relay race, which they are calling “Run for Your Life: A Relay Run Against the Dakota Access Pipeline.” It began on April 24 in Cannonball, North Dakota, and will end on May 3 at the office of the Army Corps of Engineers in Omaha, Nebraska. The runners will deliver a petition to the Corps, who are expected to soon decide whether they are to grant a permit for the pipeline’s construction.

One of the runners, Bobbi Jean Three Legs, a young Hunkpapa, Sihasapa, Miniconjou and Two Kettle Lakota mother from Wakpala, South Dakota, is especially concerned about what the construction will bring. “We look up at North Dakota and see all that’s going on and how they’re affected by it and and we don’t want that,” she told Truthout.

“Everything that comes with the pipeline, the high crime rate, the drugs, all that comes into play,” she says. “You never know who or what they are bringing. And you hear about the sex trafficking and we don’t want that for our people.”

As Truthout reported, the consequences of a pipeline cutting through the Lakota Nation are great. Debra White Plume, recently featured in the documentary film, Crying Earth, Rise Up, about uranium mining contamination of the Ogallala Aquifer, so eloquently summed this up regarding the construction of the Keystone XL pipeline some years ago.

“A lot of us look at that in terms of the same impact the buffalo hunters had in exterminating the buffalo herds which sustained our people … the railroads coming in through our territory all those generations ago not only split the buffalo herd in two, it impacted our access to the buffalo. It was also the transportation which brought the settlers and the pilgrims into our treaty territory and impacted our way of life and our freedom,” White Plume said.

Energy Transfer is offering many assurances, saying: “The Dakota Access Pipeline will be monitored 24 hours a day, 7 days a week, and 365 days a year by full-time operations maintenance staff. Additionally, the pipeline will include automated valve technology that will automatically close if a problem is detected.” However, not everyone is convinced.

Just last month, a leak of TransCanada’s Keystone I pipeline spewed nearly 17,000 gallons of oil in South Dakota, the largest spill in state history as officials struggled to find the cause despite similar safety assurances. This is the same TransCanada that would have built the Keystone XL pipeline, had President Obama not vetoed its construction last November after a long, hard grassroots battle against it by Lakota and ranchers alike, Indigenous activists, environmentalists and many others.

In a statement to Truthout, the Army Corps of Engineers said,

For the two Missouri River crossing areas the Corps completed an Environmental Assessment (EA) and provided the EA for public comment in December 2015. Comments were received and are being considered as part of the National Environmental Policy Act (NEPA) process. The NEPA process includes preparing an EA to determine if there will be significant environmental effects resulting from the proposed pipeline installation. At this time, a final federal decision has not been made for the PCN or Missouri River crossing areas.

Three Legs, who in her spare time volunteers with a youth basketball program called Hunkpapa Hoops, only recently learned about the imminent construction through the tribe’s community outreach and decided to get involved. When asked what motivated her to become so active her answer was clear.

“My baby likes drinking water,” she told Truthout, referring to her two-year-old daughter. “Sometimes my baby wakes up and she wants a glass of water.”

She explained how when she was only six or seven years old her grandmother passed away but left her with words she will never forget.

“She always told me to take care of the people,” Three Legs says. “And if this pipeline goes on the effect will last to when my babies have my grand-babies. And I don’t want them to be waiting in line for a drink of water.”

“You can’t cook food or take a shower with dirty water,” explains Three Legs. “You can’t go swimming in the river either. Non-natives also need to think about that. Our water is one of the main attractions in our state. We have big fishing tournaments. We won’t have that if our water is dirty.”

At 24, Three Legs sets a humble example for many in her small community of 200 people and beyond.

“I’m no one significant,” she explains. “I’m just a community member. I’m a stay-at-home mom. So if anybody feels like they can’t do something that’s not true. This is 2016 and this is our fight today.”

One Way or Another

Dana Yellow Fat is a Standing Rock Sioux Tribe Councilman. He is organizing meetings with the Army Corps of Engineers and exhausting all avenues within the legal system as an elected official of his tribe. But he’s starting to get nervous.

“This is sort of our last peaceful effort I guess,” Yellow Fat tells Truthout. “Our leadership has to work on the ground. Leaders have to lead by example, in my opinion.”

‘It’s kind of hard as an elected official. I don’t want to discourage our people,” he says, “but sometimes its hard to keep ’em in check. You know, there’s a lot of our people out there I have spoken with that believe so strongly about this that they are willing to lay down their lives if they have to stop this pipeline.”

Yellow Fat cites the “Winters Doctrine” as the Lakota Nation’s legal right to clean Missouri River water. The doctrine was based on a landmark Supreme Court case in 1908, which clarified water rights for Native American reservations.

“We gave the Unites States the right to use our water, not the other way around,” Yellow Fat says. “The US government is once again allowing big money to trample all over our rights.”

“We once had land as far as the eye can see. Now we are in a prison camp. Now they are chipping away at that,” he continues.

Yellow Fat, representing the home of the late Lakota leader Sitting Bull, hopes peaceful means prevail. But he warns, “I get messages from other reservations in other states who are offering to come in and stop this in their ways,” says Yellow Fat. “This is a fight for our future. Look at how our ancestors as recent as our great grandparents have fought and died for what little we have now. We are not going to allow them to take any more.”

This article first appeared on truthout.org on May 3, 2016. © Truthout. Reprinted by permission.